This week I found a lot of time to paint. Or rather, maybe it’s I painted a lot because I think I’m getting faster at finding my favorite tools within Clip Studio Paint.

August marks what is considered the anniversary of the Final Fantasy XIV relaunch (A Realm Reborn) and for the last two years I painted something to commemorate that anniversary.

This year, decided to make 7 Villains my next composite piece.   I knocked out 6 WIPs this week!

The final villain will be a surprise I guess (because it makes no sense posted as a separate piece. Hopefully will have the first composited version for posting up by August 1 , alongside the finalized tag list I’m going to be using for this year’s Rising Event.   If for some reason you’re going to run with it earlier, feel free to use these. Just pondering whether I should add one or two more 🙂 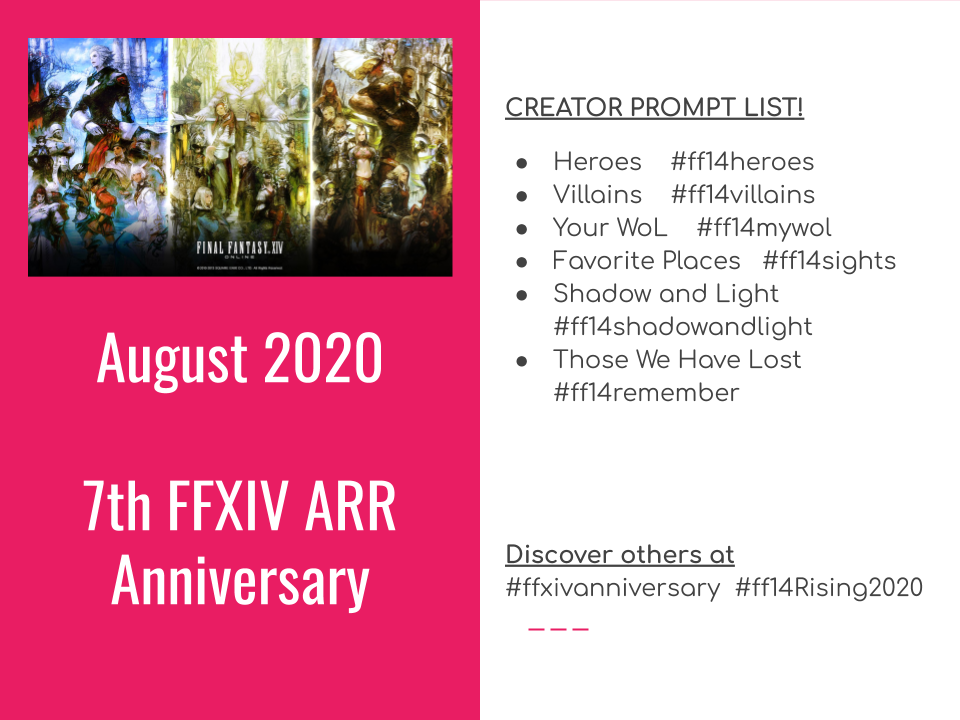 I forgot to mention that I wanted to see how my Copic markers were doing after many months of disuse.  You’ll see some experiments buried in my twitter timeline . The initial ink sketch was done on bristol paper and then scanned so I could do marker tests on copy paper. I eventually tried some other marker paper but didn’t like the absorption so abandoned the second marker coloring xD.  Also, in response to some stills released last week, I have obligatory random meme Emet Selch shot.

So my long awaited stickers have shown up from RockinMonkey !

These are what I’ll be using for the #EorzeaisConnected social media exchange. As we have no FanFest this year, the previous organizer Endy suggested we continue with an exchange irregardless.

In short, participants are depicting our player characters and  trading stickers we produce with other persons around the world.

I’ll be prepping these now for mail out for next weekend.

As for the stickers I receive, I ordered a custom notebook using one of Gooten’s partners. This is similar to a notebook currently offered on Redbubble.   At the end of the day, this did not come out on  brown craft paper as the online preview suggested.   At a price point of 16 dollars to produce (vs the 22 on Redbubble),  I’m not sure it’s worth offering on my Etsy.  The price point is higher on RB but the timeline for fulfillment was poorly communicated.  Gooten is a mixed bag of fulfillment times and you don’t know who they will push to.

As to who fulfilled this, I have USPS informed delivery and looking back, it seems the point of origin was NY State and the vendor name had “Fujifilm” in it, which makes me think it was handled by the same vendors that also do things for Costco and Sam’s Club. (Hey, Fujifilm makes wonderful large printers for photography.) If this is the case, there’s really not a huge reason to use Gooten. Rather, I suspect I can do this with any photography print service I find.

In any case, I’ve done notebooks, books,  and stationary in past artist alleys and they’re a mixed bag so I won’t be handling direct stock or preorders. Believe me, you don’t want to get stuck with excess and be storing or hauling these around! I’m still open to the idea of lighter stationary in the future.

No update on the Vograce experiment. All I know is that production should be done by now. Whether or not something is mailed, and whether I”ll have visibility, likely not based on some conversations with other artists who have recently ordered.  I’ll just have to keep looking to see if i get any tracking numbers mailed to me soon!

Given the economy, I’m also not going to be making any new items for sale until we see what Congress does.  With many benefits lapsing in the next few weeks, think need to be careful about overextending myself in terms of physical merchandise preorders.

So it’s going to be painting and more painting until the release of FFXIV’s Patch 5.3 in mid-August 🙂