Patch Day, August 11 has been looming over my head as a deadline of sorts.

One fears becoming super busy once new content in FFXIV shows up, so  prior to that I have been busy furiously trying to scratch out my anniversary pieces which technically doesn’t come until mid-late August.

That and Iam preparing seven pieces for EmetWolWeek in September and decided to do them all in color which has created quite a workload of paintings Dx.

Anniversary Paintings and other Pre-Patch Art

The past few years I’ve done a few pieces for the anniversaries, but they were kind of last minute. This year with no formal community effort being organized, I just decided that this year I would pick seven characters to memorialize.  I had a few kind followers on Twitter give me a list of names to work with. And so my first choice was to do 7 villains.   As I said in my reddit post, these weren’t necessarily an endorsement of a villain over other as better or more liked by me personally.

I really was thinking about trying to bring in something from each expansion.   Nonetheless, poor Lahabrea’s lack of presence bothered quite a few people, specifically on Reddit!  To my defense,  the weight of this piece tips heavily towards Ascians already so it felt like it would be rather too much to make a majority of them Ascians. cough.

To my defense, I did paint a separate piece afterwards, using references provided by Emmeroloth based on data that shows up  in character models.  BTW she runs an excellent twitter resource and it’s worth lokoing her up for all your questions about Ascians and the Convocation.

Last year I did have a second piece I was considering making covering all the “Kids” that had appeared in my WoL’s life. However, it never got out of sketch phase.  This year, though I wanted to create a different piece to cover those lost.

As my painting has been moving rather quickly this past month, I was also able to finish another composite painting pre-patch!

I know I”m missing many Scions and many of the NPCS in Stormblood. Really this covers more through HW only.   The one that most people don’t recognize is poor Wilfred, who your character encountered early in ARR and set straight, only to see him die offscreen later.  I’m certainly interested in memorializing others, so please let me know on twitter or here if there’s someone else I can paint now or later .

As for other  pre-patch art, the below piece was done as speculation as to what would happen in 5.3.   I’ve been thinking about this for a long time, since the entire effort began to take the Scions back to their bodies on the Source. Posted this August 2  . 🙂

Other random pieces follow:   The last piece comes from the #florasona tag done in another circle of artists and comic book and animation people I follow.  Just some quick quick pieces to decompress from the larger paintings.

I have some new art shaping up as well.  The aforementioned seven pieces for September’s EmetWolWeek are weighing on my list of things to do.  I am revising one concept and the WIP is shown below.

You can kind of see it evolved slightly differently as I was mulling this last night. Things should be left open to interpretation as well as what people notice or don’t. But having fun with limited palettes as usual. pic.twitter.com/u0QA0byolU 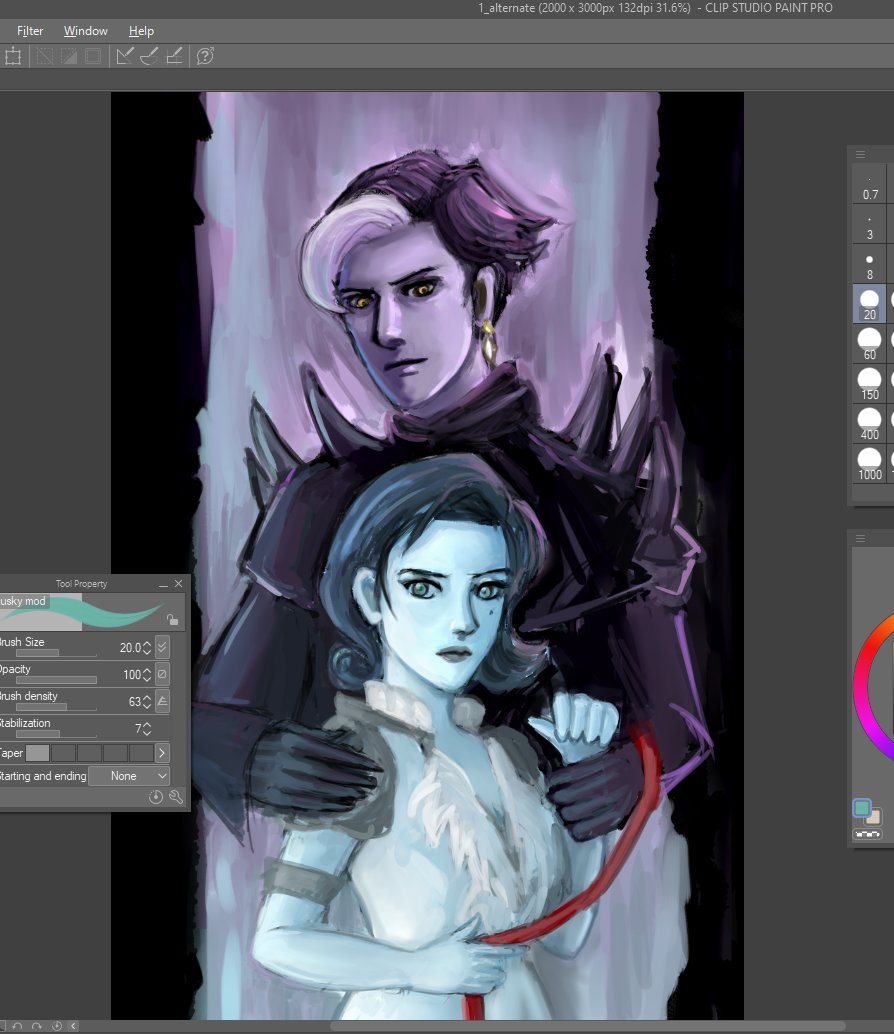 My Vograce order has come in a bit delayed and I apologize for the pictures.   I’m happy with the batch and have very small numbers. Will be adding this Friday sometime to my Etsy.

These test charms of Emet and Lahabrea came in -redid my earlier print as double boarded keychains in 3D style . I did a test charm also for Lily from ANCH using gold border. I have ten of each that I’ll put up end of week on Etsy . Debating a restock but market is saturated pic.twitter.com/aaSsKfFdMq

I’m prepping some stickers and such as well for shop extras and probably a new one for another giveaway later in the month. As it relates to Patch 5.3, I will post on it later.

On a last note, the artbook results will be announced soon. Waiting on one person to give feedback end of this week and going to do my best to post something here early next week.